Gregory Manchess - "Hand Made" Behind the Scenes, Patrón

Patrón tequila's new ad campaign aims to highlight its handmade qualities so they chose painter Gregory Manchess to lend his brush to the idea. At first, he painted a still image used for print and web after which they would use a hand model to simulate the painting for a commercial. Luckily, Greg and Richard were able to convince them to film him repaint it... it really adds a layer of authenticity. So the hand you see is Greg's hand (who might start a second career in hand modeling). 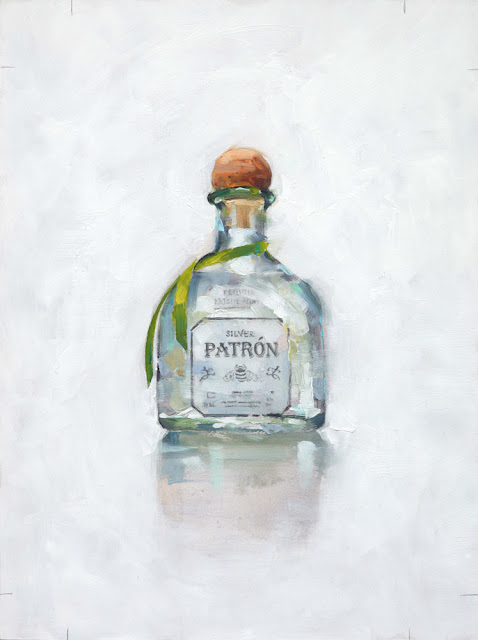 UPDATE 09/19/2013: Below is Greg's post on the Muddy Colors blog where he details the behind-the-scenes process of shooting the spot.

“Camera....speed....and--action!”The painting I made for the Patron Tequila bottle led to a live action TV spot for the company. The agency, Cramer-Krasselt, called me a couple weeks after the print ad campaign broke, and asked if I’d be interested in helping develop the TV spot by providing a new painting for the commercial.Of course I was delighted. But it wasn’t as easy as the first painting. This time, they wanted me to paint on-camera for the spot, following the strokes as they were laid onto the surface. They would need me to paint the bottle again, only larger, and they wanted to track the strokes across the canvas, as close as possible to the pigment. I loved the idea! 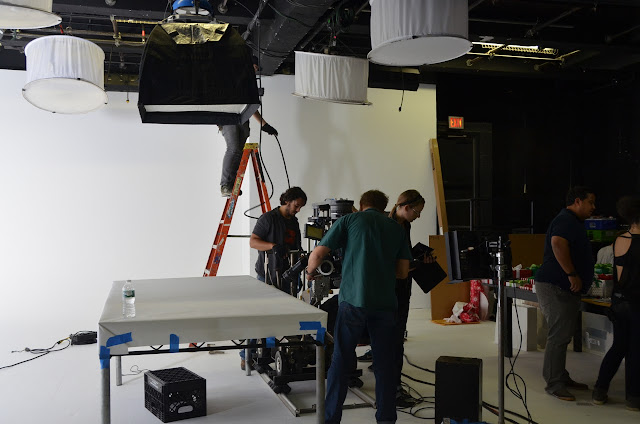 They would need about 3 stages of the painted bottle, as if I was completing it right in front of the viewer. This would take painting it in mock stages. One stage was the finished bottle, another the cork and neck partially painted, and finally the cork, neck, and shoulders of the bottle nearly complete. 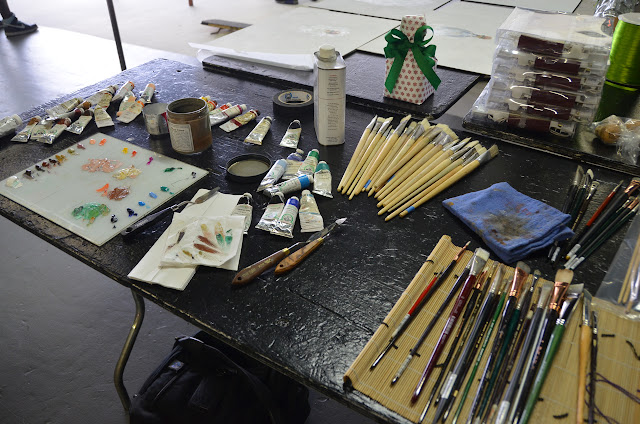 My equipment, plus a large set of brushes, stripped of their paint and logos, prepared by the production company
They wondered how I’d get wet paintings to the set. “That’s the best part,” I told them. “Each stage will be bone dry, so if I put down a bunch of strokes and the director doesn’t like it, I can wipe them off clean, and repaint on a second take.” They were thrilled by this. It would free the director (and myself) from the stress of getting it right on one take.They also wanted a hand model to do the painting. What?! If I had to coach a model on how to lay down strokes, we might’ve been there for a week. As it was, I told them my hand wasn’t so ugly. Long story short: they would use my hand, but they hired a hand model to stand by. 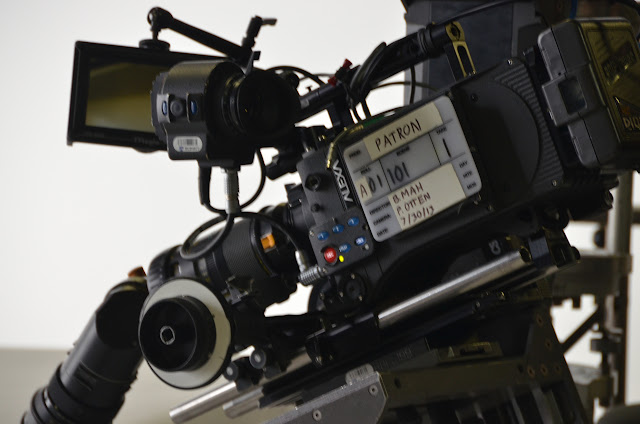 The camera, with production notes
After a few phone conversations with three directors and one in-person meeting with the agency, the production company, Alma Mater, was chosen and I was given the ‘go.’ I had one week. As I was due to fly out to Oregon, I painted the stages there. I then flew back with the new art to NYC on a red-eye to shoot on the scheduled day. We had 24 hours to capture the right look. It was a very tight schedule, despite the fact that I had be back in Oregon the day after for a planned vacation. 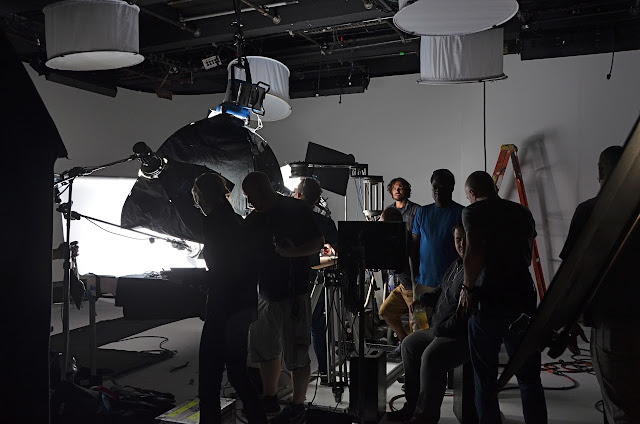 During the shoot. The lights are almost right to the table. I painted next to the camera dolly.
On the day of the shoot, I rushed to the set early and was promptly given a manicure! (My hand has never looked so good.) Painting under hot lights and obliquely to the lens was awkward, but challenging. The conditions were not the best, but I didn’t complain. I wanted my hand in there, not the hand model’s, to lend authenticity to the client’s ad. (Though I did ask the director, “what’s my motivation?” which got a few laughs from the crew...) 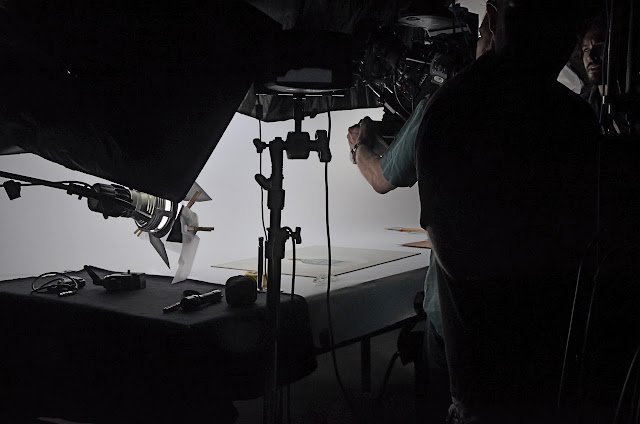 The DP adjusts the lens between shots...you can see the edge of the palette to his right
I had my palette right next to the lens and pre-mixed most of the colors. Then the director, Brian Mah, and I would talk through my movements, rehearsing with an empty brush, so that he could get a feel for what might happen, and decide if he liked the plan. Once we agreed on how to proceed, I charged the brush for the first strokes, had my piles ready, and waited for ‘quiet-on-the-set.’ Action was called, and I laid down the pigment.The cinematographer, Patrick Otten, flown in from Belgium, had a special lens that was positioned so close, it made the brush look huge on screen. The pigment piled up in glorious ways, but since our setup was so flexible, we shot take after take, to get the right motion. 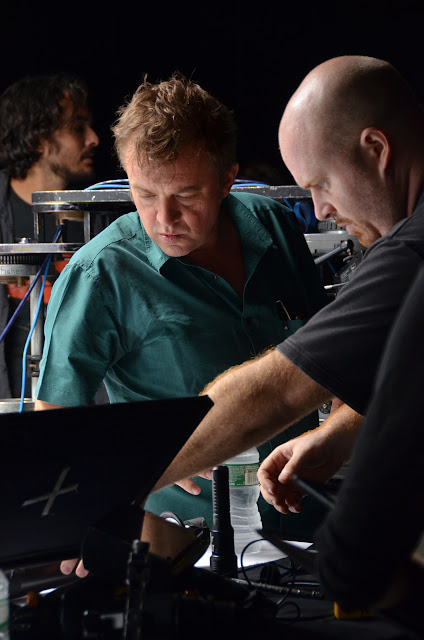 Director of Photography, Patrick Otten, with the cameraman on the right
We had a problem when I used green pigment for the bottle ribbon as it stained the gesso and I wasn’t able to clean it as perfectly as I’d hoped. So we moved around the gessoed board to work with fresh areas of substrate.A few times, I felt I had finished the sequence with the right strokes, but the camera man said, “Still rolling...!” and the director called for me to continue painting! I had to mix faster than I ever had before and start piling pigment and strokes on top of one another until, to my eye, it looked quite the mess.But on looking at the playback, I could see how the strokes and pigment all looked fresh.The last stroke I made was the accent mark over the ‘O’ of Patron. I figured I could nail it in one take. Instead, it took 8 or 9. The brush was not a familiar one and the hairs were separated and misaligned. Finally, the director asked if I could paint the stroke off-camera, and then fake the stroke in action. I did, but even that took several tries before I had the right hand movement down. I felt I had let them down, but according to the agency team, the client, watching from the sound booth, was loving it all.We shot for over 8 hours and had a lot of footage. As I had assumed, the filmmakers took some of the best shots and blended them to perfection. I don’t think anything of note was left on the cutting room floor. They made it all look like it was meant to be that way. Such is the magic of sequential editing.  Now I’m fired up to do another painting demo, but with the lens right down in the paint. I love the way it allows the pigment to ooze across the screen.Hand model anyone? 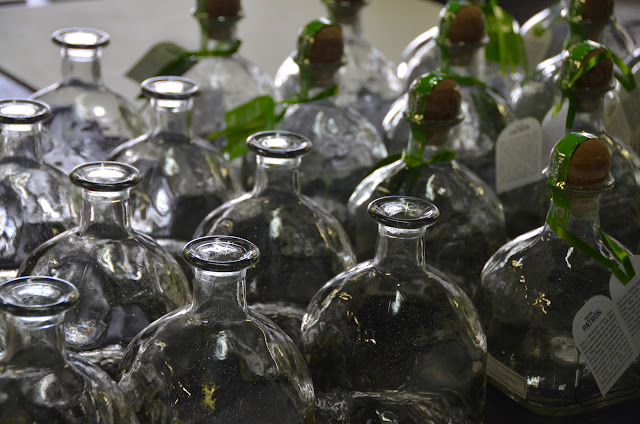